This page collects together publications on issues related to women in politics from both the Pacific and the world. It collects together research documents, campaigning resources and key papers. If you have a publication we have missed, please send it to the PacWIP team at pacwip@gmail.com. 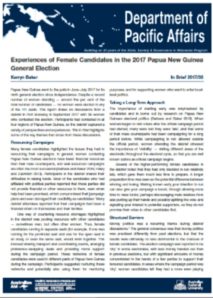 Papua New Guinea went to the polls in June–July 2017 for its ninth general election since independence. Despite a record number of women standing — around five per cent of the total number of candidates — no women were elected in any of the 111 seats. This report draws on discussions from a debrief in Port Moresby in September 2017 with 26 women who contested the election. Participants had contested in all four regions of Papua New Guinea, so the debrief captured a variety of perspectives and experiences. This In Brief highlights some of the key themes that arose from these discussions. 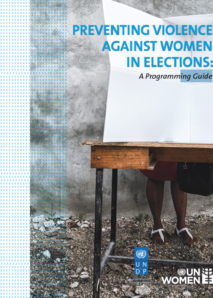 Preventing violence against women in elections: A programming guide 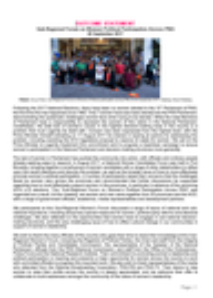 The “Sub-National Forum on Women’s Political Participation Across PNG” followed on from the "National Women Candidates Forum" held from 17-18 August 2017. This sub-national meeting, brought together women and men from 20 provinces and the NCD, with a range of government officials, academics, media representatives and development partners. Participants discussed a range of topics of national and sub-national importance, including temporary special measures for women, political party reforms and electoral challenges. We also reflected on the opportunities that women have to engage in sub-national decision-making structures, and the very challenging issue of how to effect cultural change in our communities in support of women’s leadership. Participants agreed this Outcomes Statement at the conclusion of the meeting. 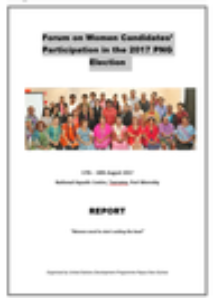 Forum on PNG Women Candidates’ Participation in the 2017 General Election

A National Forum on Women Candidates’ Participation in the 2017 PNG Election was organised by UNDP-PNG on 17 and 18 August 2017. The objective of the Forum was to gather views on how best to address the reality that no women were elected during the June 2017 general elections to sit in the 10th Parliament of PNG. The Forum provided an opportunity for participants to reflect upon the conduct of the recent elections, in order to assess what strategies and approaches worked and did not work so well for women candidates, as well as to propose innovative activities that could be implemented over the coming five years to ensure women’s presence in the national parliament after the 2022 elections. This Report captures the discussions and recommendations arising from the Forum. 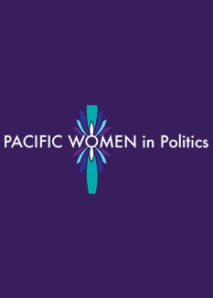 A National Forum on Women Candidates’ Participation in the 2017 PNG Election was organised by UNDP-PNG on 17 and 18 August 2017. Close to 50 participants attended the Forum, including 6 women candidates who contested the 2017 National Elections. The objective of the Forum was to gather views on how best to address the reality that no women were elected during the June 2017 general elections to sit in the 10th Parliament of PNG. The Forum provided an opportunity for participants to reflect upon the conduct of the recent elections, in order to assess what strategies and approaches worked and did not work so well for women candidates, as well as to propose innovative activities that could be implemented over the coming five years to ensure women’s presence in the national parliament after the 2022 elections. This Outcomes Statement was endorsed by participants as a summary of their most critical recommendations.

At the June 2017 PNG National Elections, no women were elected to the 10th PNG Parliament. UNDP organised a Forum on Women Candidates’ Participation in the PNG National Elections from 17-18 August to draw attention to the issue of women’s lack of representation and identify strategies for addressing this problem. In advance of the Forum, UNDP and UN Women shared a PNG Women Candidates Survey on Facebook on 15 August 2017 that was intended to assist in diagnosing the challenges women face and finding responses to address them. Links are provided to a word summary of the results of the Survey, as well as an overview Powerpoint Presentation. 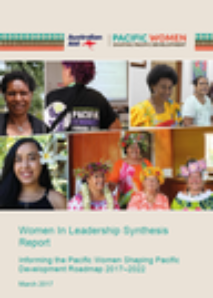 In 2016, the DFAT-funded Pacific Women Shaping Pacific Development Programme commissioned the development of a Roadmap to guide its investments across the region. The Roadmap was based on three Synthesis Reports, which delved deeper into Pacific Women’s first three focus areas, namely: (i) leadership and decision making, (ii) women’s economic empowerment, and (iii) ending violence against women. This Women in Leadership Synthesis Report was developed through a combination of literature review, stakeholder consultations, and in-depth analysis, and supplement the foundational Pacific Women Design Document. 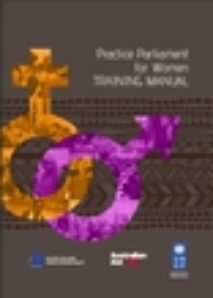 The idea for a Practice Parliament for Women came about as a direct response to the call from women around the Pacific region to be supported, and to have their political and policy skills developed. This initiative drew on the positive experiences reported from youth parliament forums in the region and elsewhere. The Practice Parliaments are designed to fill some of the gaps in the existing efforts to support women’s political participation by developing a broader set of skills and by giving women participants the opportunity to immediately apply those skills. Responding to the success of this initiative, UNDP has produced this publication to provide guidance to national partners on how to organize and run a Practice Parliament for women. 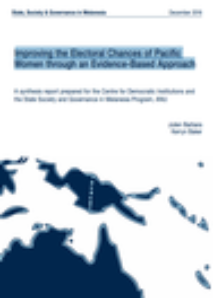 This report draws on discussions that occurred at a three-day workshop hosted by the Centre for Democratic Institutions (CDI) and State, Society and Governance in Melanesia Program (SSGM) at the Australian National University in Canberra in June 2016. The purpose of the workshop was to review the evidence base regarding lessons learned about successful campaigning, how women are positioned to run successful campaigns, and how development partners might enhance the effectiveness of support provided to women candidates by drawing on and responding to this evidence base. While the workshop focused on the Melanesian context — and Papua New Guinea (PNG), Solomon Islands and Vanuatu, in particular — it drew on lessons from other parts of the Pacific islands region and the findings of this synthesis report may be applicable more widely. The workshop was attended by a broad range of stakeholders, including campaign activists, women candidates, former and current sitting members of legislatures, development partners, NGOs, policymakers and academics from Melanesia and Australia. An annotated copy of the three-day workshop program is provided at Appendix A, with speaker names excluded. Discussions at the workshop were held on a Chatham House basis to encourage frank discussion. While the synthesis provided in this report draws on those discussions, this report reflects the analysis of the authors and should not be taken to reflect the views of attendees at the workshop. This report is supplemented by a series of framing papers which were presented at that workshop to inform focused workshop discussions and have been published as SSGM In Briefs in tandem with this report. 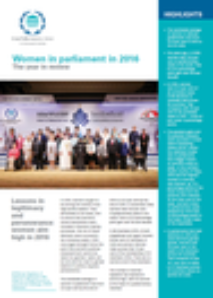 IPU Report – Women in parliament in 2016: The year in review

IPU's annual report provides information and statistics on the state of women's representation in national legislatures around the world. 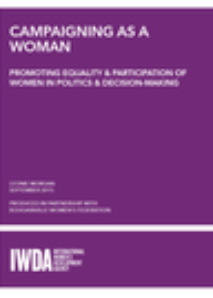 Campaigning as a woman: Promoting Equality and Participation of Women in Politics and Decision-making

This publication is one of a series of tools and publications about women in politics supported by IWDA through the FLOW (Funding Leadership and Opportunities for Women) program, funded by the Ministry of Foreign Affairs of the Netherlands. It is the result of a Candidate Debriefing Workshop conducted with women who stood for election in the Autonomous Region of Bougainville general election in May-June 2015. The workshop was organised by the Bougainville Women’s Federation and funded by International Women’s Development Agency, with the support of the Ministry of Foreign Affairs of the Netherlands, in August 2015.
The 2015 Bougainville General Election was only the third election to be held in Bougainville and represented the greatest number of women candidates ever to stand. 35 women contested, including 12 women who ran against men in open seats (the other 23 stood for the 3 seats reserved for women in the Bougainville House of Representatives). This election was the first where a woman candidate, Hon Josephine Getsi, won in an open seat, bringing women’s political representation in the House of Representatives to 10%. Several women ran strong campaigns and learned much about what it takes to succeed in an election. The 2015 Candidate Debriefing Workshop gave women candidates the opportunity to talk about their experiences during the election campaign. "Campaigning as a Woman" focuses on the areas these candidates suggested as important for women to know in order to run effective campaigns. It draws on the candidate experiences to illustrate lessons, challenges, and strategies for overcoming them. It includes comments from candidates who attended the Debriefing Workshop and case studies telling the campaign stories of five of the women candidates: Josephine Getsi, Rose Pihei, Joan Nenoari, Patricia Kapapal, Agnes Titus. 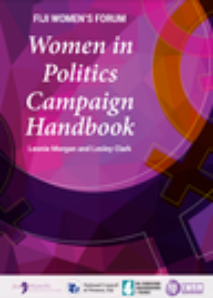 This Handbook was initially prepared as a resource for the Candidate Capacity Strengthening Workshop organised by the Fiji Women’s Forum in June 2014. The aim of the Workshop was to assist women candidates to campaign effectively for the September 2014 Fiji election. Following the election, the Handbook was reviewed and case studies added based on the campaigning experience of the various women candidates. The Handbook includes comments from participants at a debriefing session following the 2014 elections, and candidates interviewed by a Fiji Women’s Rights Movement researcher after the election. It also includes extracts from interviews with Members of Parliament undertaken by FemLINKPACIFIC following the election. The Handbook provides useful tools and includes practical advice, checklists and questionnaires covering all the key components for a successful election campaign. It is hoped that women candidates in future Fiji elections and those in other Pacific elections will find this Handbook a useful resource to help them develop and implement their own winning campaign strategies and plans.