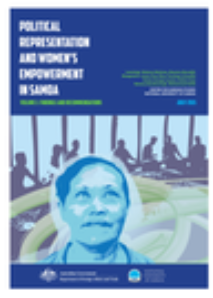 This report provides the findings, analysis and policy significance of research aimed to better understand the barriers to women’s political participation in Samoa. The paradoxical situation is that Samoan women have achieved approximate equality to men in most modern spheres of government and the economy, yet have never, since Samoa’s independence in 1962, succeeded in winning more that five seats in the 49 seat parliament. In most parliaments, women have held only one or two seats, usually for a single term. In 2015 Samoa was among the countries ranked lowest int he world for women’s representation in parliament, at 128 out of 140 countries. The research was conducted with assistance from, and in collaboration with, the Ministry of Education, Sports and Culture (MESC) and the Ministry of Women, Community and Social Development (MWCSD) over the period April 2013 to July 2015. It consisted of (i) a nationwide survey of women’s participation in political and economic village-based organizations, covering all villages and sub-villages in Samoa; (ii) a qualitative study of village organisation in a sample of 30 villages with and without formal obstacles to women’s participation in village government, and (iii) interviews of women candidates who have stood for past elections.