Gender Quotas and the 2021 Samoan Constitutional Crisis: What Next for the ‘10 Per Cent Law’?

Home » Resources » Publications » Gender Quotas and the 2021 Samoan Constitutional Crisis: What Next for the ‘10 Per Cent Law’? 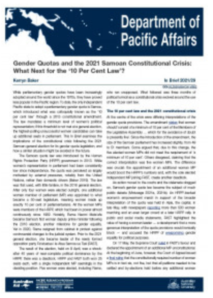 Gender Quotas and the 2021 Samoan Constitutional Crisis: What Next for the ‘10 Per Cent Law’?

While parliamentary gender quotas have been increasingly adopted around the world since the 1970s, they have proved less popular in the Pacific region. To date, the only independent Pacific state to adopt a parliamentary gender quota is Samoa, which introduced what was colloquially known as the ‘10 per cent law’ through a 2013 constitutional amendment. The law mandates a minimum level of women’s political representation; if this threshold is not met at a general election, the highest-polling unsuccessful women candidates can take up additional seats in parliament. This In Brief examines the implications of the constitutional crisis following the 2021 Samoan general election for its gender quota legislation, and how a similar situation might be avoided in the future.