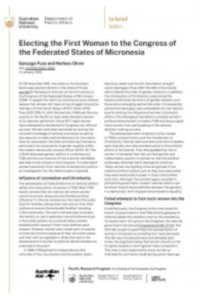 On 29 November 2021, the voters in the Southern Namoneas election district in the state of Chuuk elected Dr Perpetua S. Konman as the first woman in the Congress of the Federated States of Micronesia (FSM). It caught the nation by surprise as many citizens believe that women still have a long struggle to become members of that forum. Until this election, FSM was the only country in the Pacific to have never elected a woman to its national parliament. Since 2011, eight women have attempted to be elected to Congress, but without success. Women have been perceived as lacking the intricate knowledge of political processes as well as the capacity to make rational decisions for the nation. Such an assumption has been an enduring frustration, particularly for proponents of gender equality within the modern democratic process. This In Brief discusses gender politics in contemporary FSM and the one instance of how a woman candidate was able to win a place in the Congress. To understand women’s exclusion from national contemporary politics, an investigation into the nation’s past is required.