Woman of many talents – Seini Nabou

SEINI Nabou is a woman of many talents and after joining the National Federation Party (NFP) four years ago in 2014, Seini has gained the trust of the party hierarchy and has been entrusted major responsibilities.

She is not only a provisional candidate for NFP for this year’s general election but is also the vice president and member of the party’s management board. 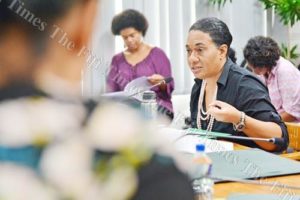 As a researcher, Ms Nabou is the NFP’s director of policy, planning, research and communications.

Ms Nabou said she was a candidate in the 2014 elections and was grateful for that experience and exposure because any journey should be about learning, growth and improvement.

Being a mother of four, she described herself as a staunch advocate of rights whether they were human, economic, political or environmental rights.

Seini as she is more commonly referred to, is an environmental and traditional science advocate.

“I can attribute all my past professional experiences as journeys that have given me better insight into what Fiji needs especially when we have natural resources that we want to exploit,” Ms Nabou said.

“Any resource extraction or exploitation should be viewed with a long-term holistic perspective and not just a short-term economic one.

“This is why EIAs that have robust consultations with all stakeholders are so critical in any approval process for resource extraction or development in Fiji.”

She added most of all, she was going to share her reflections in an open-source fashion so that she could motivate other women to consider politics as a career path.