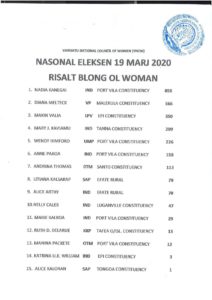 The Executive Director of the Vanuatu National Council of Women (VNCW), Leias Cullwick, is calling on the Government to enforce laws relating to the Convention on the Elimination of all Forms of Discrimination Against Women (CEDAW).

Mrs Cullwick originally opposed the idea of reserved seats, however she now says it is a must for Vanuatu as the election, which she refers to as the racing track is not equal between the male and female candidates. Mrs Cullwick uses the example of the 100-meter race and explains that in terms of the election, the female candidates are at the starting line while the male candidates of the recent legislature are already at the 70-meter mark with only 30 meters to go.

Mrs Cullwick says former MPs from the last legislature had allowances, this gives the male candidates the upper hand over the female candidates. She says the MP allocations and payments which they receive before their four-year term ends gives them the extra advantage as they can use the money to “donate” to potential voters in terms of handouts.

This may sound like bribery and unfortunately a lot of women themselves enjoy free handouts by proposed candidates regardless of the candidates being male or female. Mrs Cullwick says we are all human beings; however, women may be enticed to engage in such activities following our cultural norms where the men are the head of the household. She explains that in this case it would be most likely for the whole family to obey the head of the house hold and vote for his candidate of choice which would most likely be the male candidate which gives out handouts such as free bags of rice, spades, bush knives and so forth.

Mrs Cullwick encourages the government of today and the Electoral Commission to make sure there is a system in place for the 2024 general elections to help women to participate effectively in both the general and provincial elections. She says since 2008 until today there are no women in parliament.

As such, VNCW will be calling on the government to consider Temporary Special Measures in the CEDAW law which was enacted into parliament in 1995.

Apart from reserved seats Mrs Cullwick also believes that from economic perspective, there are too many members of parliament. She says 52 is too many. Mrs Cullwick suggests the number be reduced to 20 members with 10 seats for men and 10 seats for women which is stated in Genesis 1 verse 26-28. She says women and men should be working harmoniously to run this nation.

Mrs Cullwick says this may seem difficult but the government and electoral commission will have to figure this out as Vanuatu is an independent nation.

She says the advantages of having half the seats of parliament going to women is the fact that women will continue to work harmoniously with the men and while working together they will make sure that finances are used well in an appropriate manner and ensure the livelihood of all families in Vanuatu.

Mrs Cullwick says to see a good example of how women can manage finances well, one does not have to look further than the home, where the mother controls the finances well to ensure everything is in order. She says this is what needs to be transferred into the national Parliament.