Solomon Islands has a population of approximately 611,343 people (2017 census). The national Parliament has 50 members, and Elections 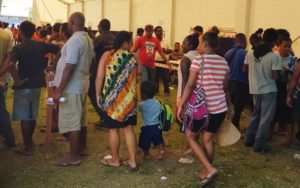 are held every 4 years. The last general election was held on 19th November 2014. The electoral system uses a first-past-the-post system, which has made it very difficult for women to get elected. To date, there have been no further changes to the electoral legal framework since the publication of the 2018 Electoral Act. No amendments have been made to either the Political Parties Integrity Act or the legal provisions underpinning the provincial elections.

On the 5th of February, Sir Frank Kabui, the Governor-General of Solomon Islands made a proclamation to set the Election date for 3rd April 2019. This is in accordance with the 2018 Electoral Act, which specifies that national elections are to take place within four months after the dissolution of Parliament, that took place on 17 December. A 14 day candidate nomination period started on Wednesday 6th February. The proclamation also marked the start of the official campaign period which will run until the day before the polls open.

According to news reports, there are just over 359,000 registered voters, which is a significant increase of just over 71,000 more voters since the last elections in 2014.

At the end of the candidate nomination period, 333 candidates were nominated, which is lower than the 2014 elections which had 447 candidates.

More updates on the Solomon Islands election will be posted on PacWIP as the election date draws near.