The Papua New Guinea  Integrity of Political Parties and Candidates is now calling on women leaders to join political parties in preparation for the 2022 national elections to win seats into parliament. 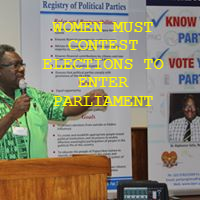 While commenting on the non-representation of women in this parliament, Registrar Dr Alphonse Gelu told NBC News that women leaders must become members of the registered parties and contest election like their male counterpart. They can also contest as independent candidates.

Dr Gelu said it won’t be fair in PNG’s democracy if women are given free representation in Parliament without going through election processes.

He encouraged women to join political parties with good policies, so that they can be able to provide support during elections to get them elected into parliament.