Alotau, 20 January 2022: At the National Forum for Aspiring Women Leaders held in Alotau this week, the Registrar for Political Parties, Dr Alphonse Gelu, noted that the years between elections, and “in particular the months before an election is called, are critical opportunities for political parties to direct specific attention towards identifying good, strong candidates.”

“We know that women are more likely to be elected if they have the support of the resources and networks of a political party. We therefore need political parties to see the value of endorsing women candidates,” said Dr Gelu. 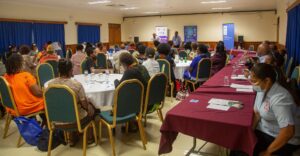 At the last National General Election, despite 167 female candidates contesting, none were elected. Although numbers are rising significantly, research shows that less than 4% of women candidates contested the 2007 and 2012 elections. Historically, women are also less likely to be endorsed by political parties to run for National Parliament in Papua New Guinea, even though the majority of MPs elected to the National Parliament belong to a political party.

Recognising the inherent value of including women’s voices in PNG’s national legislature and other elected local assemblies, the Integrity of Political Parties and Candidates Commission and the United Nations Development Programme have been running a series of regional trainings to support women candidates.

This week they held a National Forum from 18-20 January in Alotau which aimed to build the knowledge and capacities of aspiring women leaders from across the country in advance of the National General Election which will be held in June 2022.

At the closing ceremony today, the IPPCC and UNDP launched a new “Training Manual on Women’s Political Participation and Representation”, which provides practical guidance to aspiring women candidates on the rules and strategies that can be considered when running for election. It captures a range of lessons learned and good practices from PNG. The Manual, along a guide for Political Parties can be accessed at the IPPCC website: http://www.ippcc.gov.pg/index.php/resources.

At the Forum, UNDP Resident Representative in PNG, Mr Dirk Wagener noted the critical challenge the country faces with no women in parliament. “There are no women members of parliament and no female Governors. We all know since independence in 1975, only seven women have ever been elected to Papua New Guinea’s National Parliament.

“I sincerely hope that through this forum and also all the work we have supported with IPPCC over the years will enable you to select candidates with integrity, good values and leadership qualities who will support the development and prosperity of Papua New Guinea,” said Mr Wagener addressing political party executives.

H.E. Jon Philp, Australian High Commissioner to Papua New Guinea noted: “If you have diversity in representation, you get better results.” He emphasized the need for more women’s leadership at the national level to reflect the principle of equality enshrined in the National Constitution.

Women participants at the forum learned from national experts, including representatives from the IPPCC, PNG Election Commission, UN agencies and political party executive members. They shared their own experiences and lessons, with a focus on specific campaigning approaches and strategies.

“Women will definitely make the change. I believe through this forum and trainings, women will go all the way – but in order to achieve that, women and men need to work together to make a difference,” said Millie Saifoloi, of Kerema in Gulf Province.