On 12 & 13 September 2018, Niue’s women MPs held a workshop, opened by the Acting Premier and with the support of UNDP’s Australian-funded Regional Women in Politics Programme, to form a women’s parliamentary group.  With five women MPs, out of a total of 20 seats, Niue has 25% female representation – the highest in the Pacific region. Two other Pacific countries have formed women’s parliamentary groups with the aim of enabling better gender equality outcomes and increasing women’s political participation: the Samoa Women’s Parliamentary Association and the Cook Islands Women’s Parliamentary Caucus. 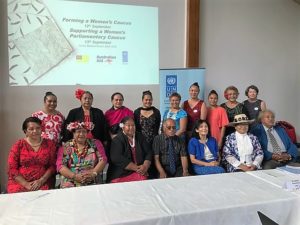 To be a responsive and committed women’s parliamentary group that works together for the betterment of the communities they represent, through active involvement on issues affecting women and communities.

Its members are current and former women MPs, with an Associate Member category for women business, community and public-sector leaders who share the vision. In the second day of the workshop, women leaders met with the MPs to discuss gender equality and women’s political representation in Niue and to determine how they could support the work of the Niue Women’s Parliamentary Alliance.   Matakau He Tau Ekepule Fifine Ha Niue will now meet to finalise their workplan, having identified the activities that they intend to pursue. Niue’s next general election will take place in 2020.

Simona Marinescu, Resident Representative / Resident Co-ordinator, UNDP Samoa Multi-Country Office congratulated Niue on having the highest proportion of women MPs in the Pacific region and said: ‘Women’s parliamentary caucuses are a way of ensuring that gender equality and the SDGs are on the agenda of Parliaments.  I encourage Niue women to claim the decision-making space. They are very capable and in taking leadership can enable development and growth.’