Need for visionary leadership in Fiji

VETERAN politician Adi Sivia Qoro believes there is a need for visionary leadership in Fiji. 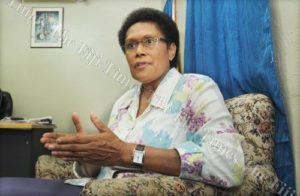 Adi Sivia had contested the 2014 election under the People’s Democratic Party (PDP) but this year she will be contesting the polls on a Unity Fiji party ticket.

As the president of the party, Adi Sivia said there was a need to engage everyone in nation building, but at the same time to preserve and strengthen the differences that exist as pillars of a bigger vision.

Adi Sivia, who is an independent consultant and a monitoring and evaluation specialist in the Middle East, Asia and the Pacific region, said she was going to advocate on a number of issues for the 2018 election.

“Priorities include the rights to ensure access to appropriate, adequate and affordable healthcare of satisfactory quality and the allocation of maximum available resources to reach these goals.

“The right to education, including a responsibility to provide basic education for individuals who have not completed primary education,” Adi Sivia said.

As a gender and development specialist with more than 19 years of experience, she said she would also be focusing on the protection and promotion of gender equality in all levels of decision-making and the protection of women and children from all forms of gender-based violence.

Adi Sivia is a board member for Rise Beyond The Reef, a non-government organisation (NGO) that works with remote communities in Fiji to create a sustainable and better world for women and children.

She is also a board member for Homes of Hope, a Fiji-based charity working with young women and children who are victims of sexual exploitation.