Minister for Women encourages women to stand for the elections 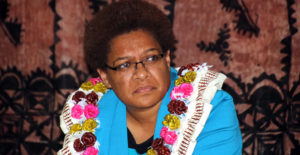 The Minister for Women, Children and Poverty Alleviation Mereseini Vuniwaqa

Women across Fiji have been encouraged to stand for the elections this year and exercise their right to vote by the Minister for Women, Children and Poverty Alleviation Mereseini Vuniwaqa.

Speaking at the Nadroga Andhra Sangam Naari Sangh Women’s Forum last night, Vuniwaqa says women in Fiji are now having better access to justice when their human rights are violated through domestic violence and sexual abuse, and they are now provided with much better healthcare facilities.

She says we have women who have shattered stereotypes by entering workforces that were male dominated but locally, we are still to see equal numbers of women in decision making roles.

Vuniwaqa adds we are still to see women live a life free from violence and discrimination.

She also says we are still to see women receive recognition for the contribution they make towards nation building through their toil in the informal sectors.

The Minister says to achieve all this, parents need to instill in our sons the value of treating each other with respect and love regardless of their gender.

She says it is her hope that men will use this power for women, instead of against them.

Vuniwaqa adds that as a society we need to be able to recognize instances of gender discrimination or inequality and call it out.