WOMEN need an equal seat not only in Parliament but also in local governments, including town municipal councils as well as district and provincial councils.

These were the sentiments shared by the executive di 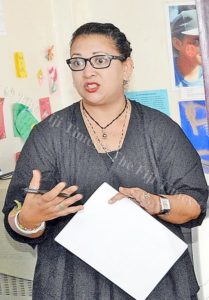 rector of femLINKPacific Sharon Bhagwan-Rolls as the country prepares for the 2018 General Election.

Ms Bhagwan-Rolls said including women in these sectors would ensure gender equality.

“It is how we will ensure that women’s issues are not just discussed but also ensure gender equality is applied in all decision making.

“We need to see greater accountability to the succession of commitments and we need to address the persistent barriers to women’s leadership,” she said.

She said it was Government’s responsibility to ensure the progress of the UN Convention on the Elimination of All Forms of Discrimination Against Women (CEDAW).

“All government MPs and all political leaders must be accountable to progressing gender equality beyond just counting the number of women participating in activities or the number of projects implemented for women,” she said.

“Government has state responsibility to progress CEDAW and Cabinet should ensure that all decisions are in compliance with gender equality and women’s rights commitments across all sectors. Ultimately they should be the champions of compliance and change.

She added all political leaders should understand the outcomes of the recent CEDAW committee meeting in relation to Fiji, particularly the activation of all the task-forces of the Women’s Plan of Action, especially the task-force on women in shared decision making.