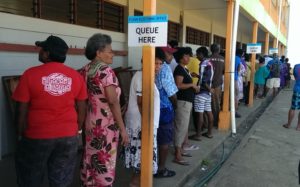 Women made up 24 per cent of the to­tal number of candidates who con­tested the 2018 Fiji General Election, says Supervisor of Elections Mohammed Saneem.

Fifty-six women initially contested and at the declaration of the official results on Sun­day, 10 women were confirmed to take up par­liamentary positions for the next four years.

Mr Saneem said this year’s election had more women in Parliament compared with the 2014 election.

“In 2014 the total number of women in par­liament was eight including the speaker and in the 2018 General Election we currently have 10 members of parliament who are fe­males, confirmed,” Mr Saneem said.

“In 2014, 44 women contested the election – that was 18 per cent. The evolution of de­mocracy in Fiji is becoming more and more interesting,” he said.

“The number of women contesting the elec­tion has increased, the number of women in Parliament has increased to now at least one-fifth relatively of the total members of Par­liament, which is women. This will continue to grow as more and more women contest the election due to the access that they have to contesting the election.”

In a statement sent yesterday, Fiji Women’s Rights Movement Executive Director Nalini Singh said: “It is encouraging to see an in­crease in women’s representation at national level. This will empower other women to par­ticipate in decision-making at other levels of society and dismantle harmful stereotypes and barriers that still exist for women.”