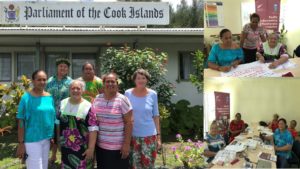 Snapshots from the Cook Islands workshop held at the Parliament on the Women’s Parliamentary caucus. (PC: Christine Ross/UNDP)

Now called the Cook Islands Women Parliamentarians Caucus, the membership is bi-partisan in nature as it involves women MPs from the Government and Opposition sides of the House.

Internationally, the Inter-Parliamentary Union (IPU) has found that 81 Parliaments have established some form of women’s caucus.

The Speaker of the Cook Islands Parliament, Honourable Niki Rattle, as a passionate advocate for gender equality in Parliament, was excited about the prospects and opportunities the Women’s Parliamentary Caucus will bring. She hopes that this can help tip the balance for representation.

“While the status of women in the Cook Islands has improved, men still outnumber women in jobs with status, power and authority,” said Hon. Rattle.

“The Cook Islands Women Parliamentarians Caucus is a proactive approach that advocates for equitable outcomes for all through law-making, budgeting, oversight and representation.”

She added, “through this approach, we hope to reach out to women in the Cook Islands and encourage them to stand for elections which will increase the number of women in Parliament.”

“The significance of the launch was also underscored with the visit of the Prime Minister of New Zealand, the Rt Honourable, Jacinda Adern – a woman holding the highest political office,” said Hon. Rattle.

“I hope that women of Cook Islands will be able to see that they too, can stand and lead.”

Confirmed by the Inter-Parliamentary Union (IPU) studies on Equality in Politics and Gender Sensitive Parliaments, the establishment of women’s parliamentary caucuses is one of the mechanisms that have enabled women to strengthen their political impact.

Only 23% of the world’s MPs are women, so they are a minority in male-dominated institutions (only Rwanda has more than 50% female MPs).

Across the Pacific (excluding Australia and New Zealand), the average number of women MPs is 7.2%, the lowest in the world. With four women MPs, the Cook Islands is better than the Pacific average, at 16.6% female representation plus a woman Speaker.

The Country Director, United Nations Development Programme (UNDP) Pacific Office in Fiji and Head of Pacific Regional Programme and Policy, Bakhodir Burkhanov echoed the sentiments of the Hon. Speaker and congratulated the efforts of the founding members of the Cook Islands Women’s Parliament Caucus.

“The achievement of the sustainable development goals (SDGs) cannot be met if women are denied meaningful political participation,” said Burkhanov.

“International agreements such as CEDAW, the Beijing Platform for Action and the Pacific Leaders Gender Equality Declaration all stress the importance of increasing the numbers of women in political and other leadership, as part of gender equality strategies.”

He added, “women’s caucuses can also help to bring together equality between men and women in the daily operation and work of Parliament.”

The formation of the Cook Islands Women Caucus is part of a programme of support by the Pacific Parliamentary Effectiveness Initiative (PPEI) implemented by the UNDP Pacific Office in Fiji with funding support from the Government of New Zealand’s Ministry of Foreign Affairs and Trade (MFAT).

The UNDP PPEI is a three-year programme implemented in collaboration with the Parliaments of Cook Islands, Papua New Guinea, Solomon Islands, Tonga and Vanuatu, focusing on a number of areas including improving procedures and processes in Parliaments and building the capacity of Members of Parliament and Secretariat staff.