Cook Islands: Rose Brown to stand as Independent candidate for Atiu in 2018 elections

Cook Islands Party MP Rose Brown has announced that she will be standing as an independent candidate for the Atiu electorate of Teenui-Mapumai.

Brown, who was elected as the CIP candidate for Teenui-Mapumai in 2014 and later became the Cook Islands’ first female opposition leader in 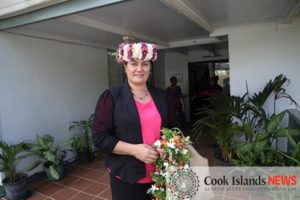 2016 before returning to her party in 2017, says CIP members Nandi Glassie and Man Unuia “have been trying to influence my nomination in Teenui-Mapumai”.

“They want to stop me being nominated as the CIP candidate for Teenui-Mapumai,” she explained.

Brown claims Glassie and Unuia also told CIP president Nga Jessie that she should withdraw the nomination of her daughter Tehani Brown as the Demo candidate in the other Atiu electorate of Tengatangi-Areora-Ngatiarua, a seat currently held by Glassie.

Brown went on to say that she had been made to feel unwelcome and untrusted by the CIP, hence her decision to stand as an independent.

“I had no intention to move from the CIP, and my constituency committee did not want me to,” said Brown.

“There was a meeting held in Atiu on April 26 where they wanted me to stay as a CIP, but now the CIP have forced me out.”

Brown said she gave CIP president Nga Jessie until 3pm on Friday, April 27 to advise her of his decision regarding her CIP nomination – a nomination which she says was confirmed in an Atiu meeting and sent to Jessie three months ago.

“The interfering CIP of Rarotonga held a meeting regarding this on Friday April 27 and again on April 28, apparently to decide if they were going to replace me with Mr Apii Porio, which they are permitted to by the decision of the CIP president,” said Brown.

“This leaves us with a very interesting situation, and one that is similar to the mess that the CIP created in Titikaveka recently where they abandoned their candidate,” she added.

“It is sad that the democratic right of the people of Teenui-Mapumai has been denied by the Raro CIPs, mainly the president, Nandi Glassie and Man Unuia.

“It may now come to pass that the CIP will lose two seats in Atiu.”

In 2016 Brown became the Cook Islands’ first female opposition leader, following an unsuccessful attempt by the opposition coalition to take over the CIP-led government and install her as prime minister.

She later spoke of her wish to form what she described as a “Government of National Unity”.

“We should use all the resources that we have available in our efforts to make the Cook Islands a better place to live and work,” she said at the time.

“That means some or all of each of the political sides coming together and shaking hands to form a Government of National Unity.”

A year later, in June 2017, Brown returned to her former CIP colleagues after quitting the opposition when William ‘Smiley’ Heather was appointed leader.

Brown has also served as deputy House Speaker, as well as sitting on the Parliamentary Select Committee for the Crimes Bill 2017.