The number of candidates contesting the General Election in June 2018, has increased by six over the number who vied for seats in the 2014 elections. This represents a rise of just over 10 per cent. 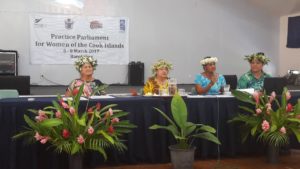 Hon. Speaker Nikki Rattle and Hon. Selina Napa addressing participants at the 2016 Cook Islands Practice Parliament for women, on the importance of women standing in elections and being represented in Parliament.

In the June 14 polls, 58 candidates from the governing Cook Islands Party (CIP), Democratic Party, One Cook Islands (OCI), Independent, Titikaveka Oire and “Alternative Must Ravenga Openga” will be competing for 24 seats.

There were 52 candidates from CIP, Demos, OCI, Independent and Titikaveka Oire contesting in the 2014 elections.

Of the 58 contesting in this year’s elections, 12 are females, representing just over 20 per cent of the total number of candidates.

This is an increase of five female candidates over the seven who contested the 2014 elections.

Of those seven, four were successfully voted into parliament.

They were long-time politician Ngamau Munokoa, Rose Brown, Tetangi Matapo and Selina Napa. All four are standing again in the hope of retaining their seats.

CIP won the last elections with 12 seats compared to the Democratic Party’s nine and OCI’s two.

Despite winning the most seats, the CIP recorded about five per cent fewer of the total votes than those gained by the Democratic Party.

Meanwhile chief electoral officer Taggy Tangimetua said her office was on track to confirming polling officers and voting stations for the June 14 polls.

She said they were also looking at ironing out issues detected at the 2014 elections to ensure a smooth election this year.

“There have been requests sent from the outer islands to have someone from the head office on the respective islands for the elections, and we are looking at mobilising that as well,” Tangimetua said.