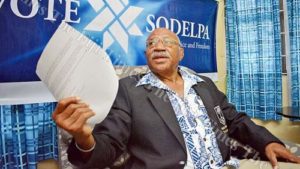 SODELPA leader Sitiveni Rabuka the party has not received any application from any other members of the now suspended People’s Democratic Party besides Lynda Tabuya. Picture: JONA KONATACI

THE Fiji Labour Party has called for more women and youths to show interest in politics.

Party leader and former prime minister Mahendra Chaudhry said while the party had received applications from individuals interested in contesting this year’s polls on the party’s ticket, he wanted more women and youths to apply.

Mr Chaudhry said the party advertised for candidates and would make announcements soon. He said while the party had no major announcements in the coming days, it was reviving its branches and structures within.

Meanwhile, the party opened its Lautoka office on Wednesday.

The office will be manned by the party’s assistant secretary general Aman Singh and will cater for the Lautoka and Vuda districts.

The move is an initiative by the party to help ordinary people liaise better with party representatives and those who will likely be candidates in this year’s election.